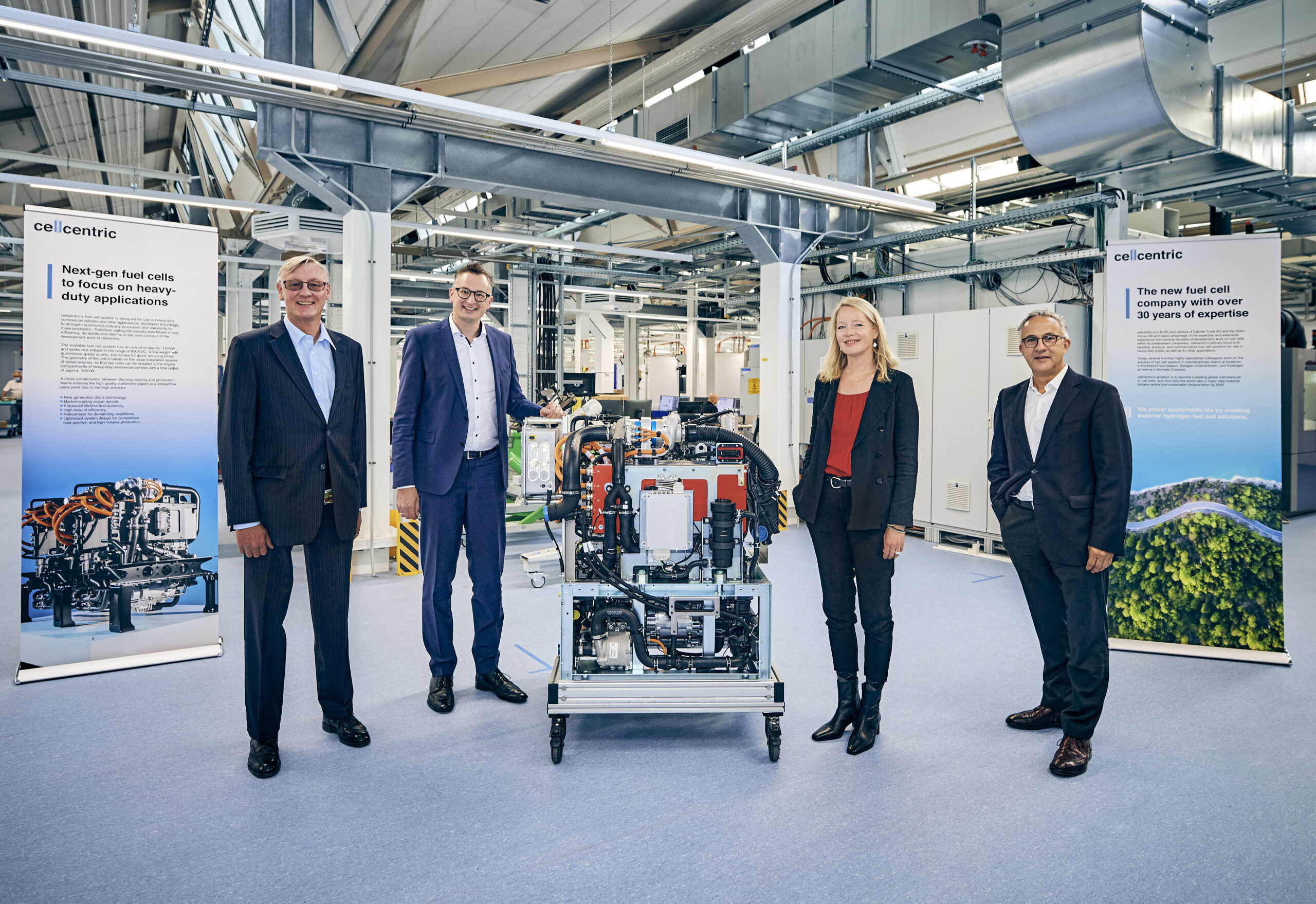 Mrs. Thekla Walker, Minister for Environment, Climate and Energy Management and Mr. Andreas Schwarz, Chairman of the Green Party in the State Parliament visited cellcentric at the Kirchheim/Teck-Nabern site.

Kirchheim/Teck-Nabern – cellcentric is consistently pushing ahead with the series production of fuel cells, with the goal of becoming a leading global manufacturer of fuel cells. In order to achieve this goal, cellcentric is striving to build a new production site for series production. In this context, the company is currently in an in-depth exchange with political representatives and local authorities in Baden-Württemberg in order to carry out a refined site evaluation of attractive possibilities.

With its visit, the Green party leader underlines its interest and support for fuel cell technology and its future role for the region of Baden-Württemberg. Andreas Schwarz emphasizes “We want to make Baden-Württemberg a technology-open, global pioneer for climate-neutral drives and digital networking. Fuel cell and hydrogen technology will play an important role in achieving climate protection goals in transportation.”

“We see the fuel cell as a key technology, particularly in heavy-duty transport. The rule of thumb is that the heavier the load and the longer the distance, the more suitable the fuel cell. Both the low weight of the fuel cell and the short refueling time to restore the range are comparable to the conventional diesel drive in heavy commercial vehicles,” explains Dr. Matthias Jurytko, CEO cellcentric. This gives cellcentric a significant role in achieving climate protection targets in heavy-duty transport. In addition to contributing to climate protection, cellcentric sees other opportunities for the region. “Setting up our series production in Baden-Württemberg is not only an opportunity to make the region a global pioneer for climate-neutral drives, but also an opportunity for new, high-quality jobs in our region,” says Prof. Dr. Christian Mohrdieck, Managing Director of cellcentric.

To date, there has been no final decision on the choice of location for the subsequent series production.

“Our talks have confirmed that cellcentric and the state government of Baden-Württemberg are pulling in the same direction to make our business location fit for the future”, summarized Thekla Walker the conversation at the end.

cellcentric is a joint venture of Daimler Truck AG and the Volvo Group formed in March, 1st 2021 and takes advantage of the expertise and extensive experience from several decades of development work on fuel-cells at its predecessor companies. cellcentric’s ambition is to become a leading global manufacturer of fuel-cells, and thus help the world take a major step towards climate-neutral and sustainable transportation by 2050.